Ever had to sit an SAT or ACT test, which included AP math or calculus? Thinking of going in for an engineering, sciences, or math degree in college? Then, chances are you already know about the TI-84 Plus series of graphing calculators. They may have looked complex to you at first, but, as time went by and you got used to their features and functions, you realized just how great they are, insofar as making your life in class goes. Today's post explores the history of the TI84 Plus, the most popular range of graph calculators from Texas Instruments.

A bit of background on Texas Instruments

TexasInstruments (or TI, in brief), may be known to you for their TI calculators; however, at a larger scale, they are actually also one of the worlds largest manufacturers of semiconductors. Components made by TI are sold to just about all the major electronics designers and producers the world over. The company, founded in 1930, under the name of Geophysical Service Inc., is publicly listed with the NASDAQ-100 and S&P 500 indexes. It is third only to Intel and Samsung on the global ranking of semiconductor manufacturers by production output and it is second to Qualcomm as a chip supplier for mobile phones.

The company switched to its current name in 1951, after the mother company, Geophysical Service, was reorganized. The former enterprise used to produce seismic equipment and electronics used for defense systems. Early on in the 1950s, likely prompted by the new realities of the Cold War era, TI started researching transistors. It was around that time that it designed and released the first silicon transistor to be sold commercially, as well as the first transistor radio (1954). Other notable inventions which we owe to the Dallas-based company include the integrated circuit (1958), and the worlds first ever computer based on integrated circuits (produced in 1961 for the US Air Force). Aside from researching infrared technologies, radars, and missile control systems, in 1967, TI introduced the hand-held calculator.

By the 1980s, the company was largely focused on producing consumer goods, like digital clocks and watches, as well as calculators and computers. Interestingly, also during the Cold War era, but toward its 1980s finale, TI also produced an old English language translator, initially priced at $150, and based on its 1979 release, the talking Language Tutor. Though innovative, thanks to its Solid Speech Module, the product eventually tanked. Its most notable pop culture presence remains recorded for posterity, on the 1981 album Computerwelt / Computerworld, released by German electronica pioneers Kraftwerk.

The Texas Instrument defense segment was purchased by another company in 1997. Meanwhile, throughout the 1990s, the company reached new heights, as its line of hand-held calculators was becoming increasingly popular with programming students.

The emergence of the TI-8x series

TI calculators like the TI-81 were already on the market, when the demand for graphing calculators saw a boom in the 1990s. Programming was becoming trendy and the TI 83 was the first ever hand-held calculator which included native Assembly. Its predecessor TI 81 was able to create simple programs through its BASIC language interpreter and the subsequent TI 85 was the first to allow Assembly. With the advent of native Assembly, users could run programs and games similar to those on a PDA or Gameboy. As the world became more and more interested in the Internet and programmers started to publish their work on Angelfire and GeoCities-based websites, the online community of Texas Instruments calculator users gained momentum. It reached its pinnacle of popularity in the early 2000s - which is right before the company released its most popular device to date, the TI 84. 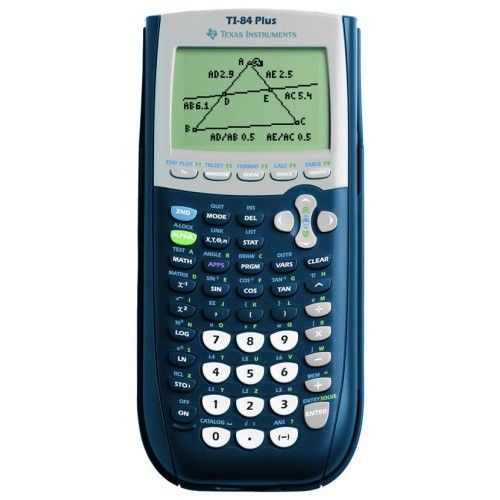 Unlike with its predecessors, the TI-84 line featured no original device called as such. It does include the TI-84 Plus, as well as two other calculators, which we will describe in a bit more detail below. It is not exactly the cheapest device of its kind, but you can find it on sale, at a less expensive price, on Amazon, or find a vendor to sell it refurbished, on eBay. Just make sure the vendor does not cheat you out of extra money, for a calculator which needs repair. Alternatively, in my experience, you can also probably buy it for cheap, on sale at Walmart or Home Depot. You can get a full 50 percent discount at times there and they also offer coupon price cuts and seasonal back-to-school deals. On the plus side, you can also buy extra accessories, like stands or cases, from official vendors - not to mention the fact that you benefit from a full warranty, too.

Outside of school use, there is more than just one review out there which says this a great tool for financial operations, such as working out lump sum payments on mortgages, rent and interest rates, and so on. And aside from calc, graphing, finance applications, office use, and other things it is good for, it is also a top choice for games - especially for math geeks. You can play Tetris, Monopoly, Pokemon, Mario and other free to download ROM games off this super cool device. First off, however, let us list a few key facts about the TI-84 Plus flagship scientific graphic calculator:

-          It is based on the TI83 Plus, which can be easily noticed from the relatively identical keypads both display.

The TI-84 Plus Silver Edition 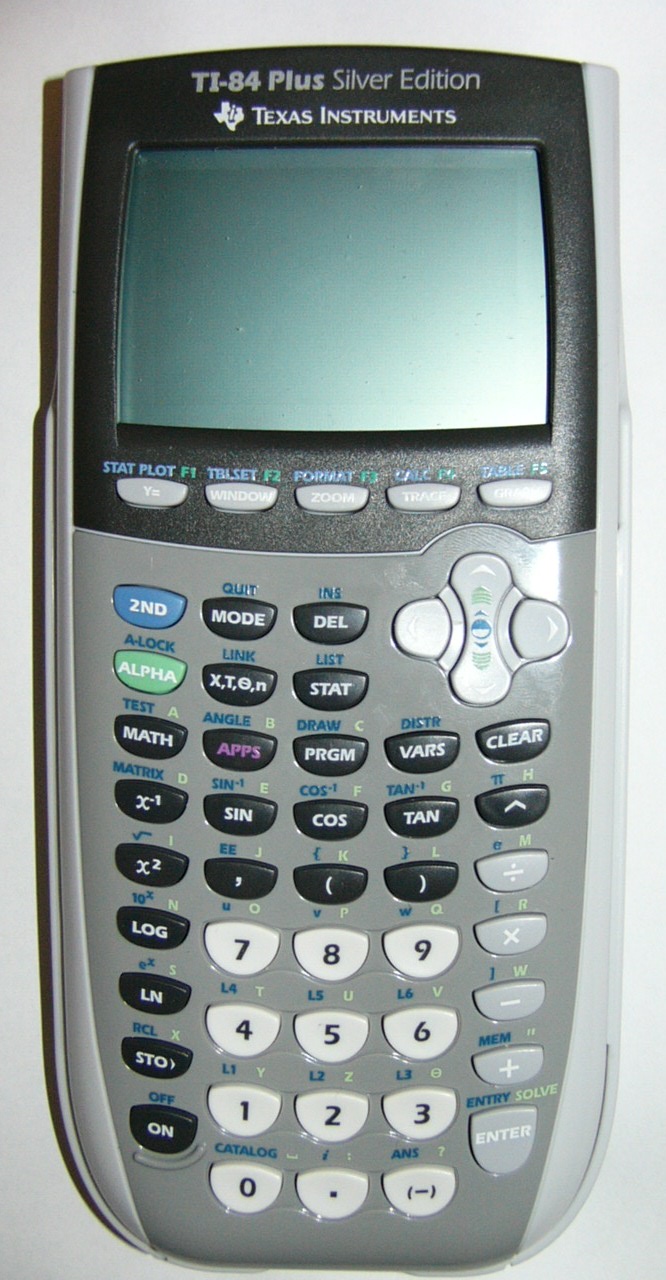 -          Devices with the letter H or later in the product code run on less RAM, which may cause software malfunctions

-          Comes with several pre-installed apps, which are also available for the TI-84 Plus, but only via download from the manufacturers website

-          Also available in yellow, with the inscription -School Property-, to be borrowed by students from school

-          Features several available accessories, which can be purchased separately, like a kickstand case, colored face covers, and others.

-          Available in several cover colors, including blue and pink

The TI-84 Plus C Silver Edition

-          Keystrokes are compatible with several other math and programming tools 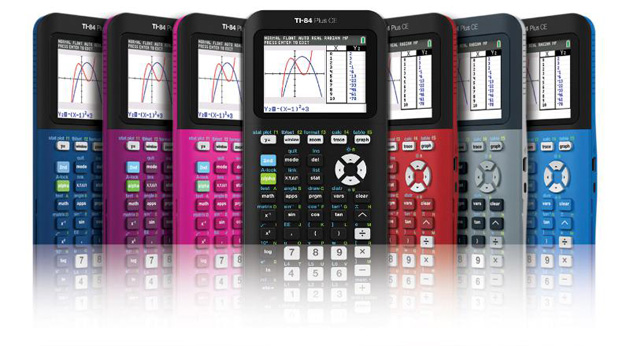 The newest and possibly the best of all graphics calculators in the TI84Plus line, this device will represent an important update to the present line. The graphical calculator will likely feature the latest in advanced calculation technology, according to the TI84 wiki page description. Since prices and reviews for it are not yet available, it is hard to compare it to its predecessors, although a comparison will definitely be in order once it is released.

Using the TI-84 as a quadratic solver

Given the level at which the TI 84 is typically used (from the junior year of high school and upward, throughout college), many users end up scratching their foreheads when it comes to solving a quadratic equation. We are here to tell you that part of the TI 84s popularity is the fact that you can easily use it as a quadratic solver. We have devised a set of tips, tricks, and instructions - a sort of quadratic equation tutorial for dummies. It might not look as simple as a game, but you do not know what it is actually like until you try it. Here are the simple steps that our instruction guide requires:

Step 1: Press the PRGM button, then the   twice, get to 'New' and choose 'Create New'. Name your operation (something to act as a prompt for 'quadratic equation' is probably preferred). Then press, followed by 2. Press ALPHA for letters. Enter A, B, C, and press Enter.

Step 2: Enter the formula as seen in the above picture and remember to use the Negative button before the first B. Store the formula with STO. By this point, you have made the equation equal to X, by entering plus the square root of B squared. Since the TI-84 does not have a plus or minus button, you are going to have to enter the equation as two separate operation. The two are highly similar, save for a few easily noticeable key differences.

Important: Do not press CLEAR, as this will delete your entire line. Press 2ND, then MODE (QUIT). Press PRGM, select the quadratic solver, hit enter and insert desired values for A, B, and C. Bear in mind that the quadratic equation formula is 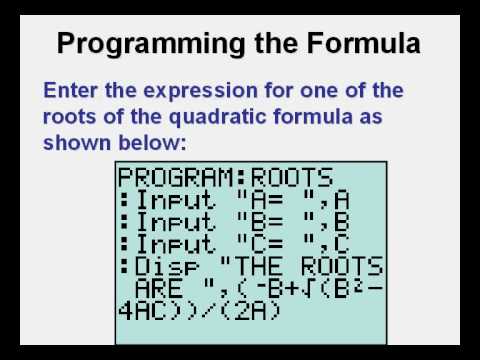 After you have replaced all your variables with their actual values, press Enter and find the solution.

TI Connect and beyond 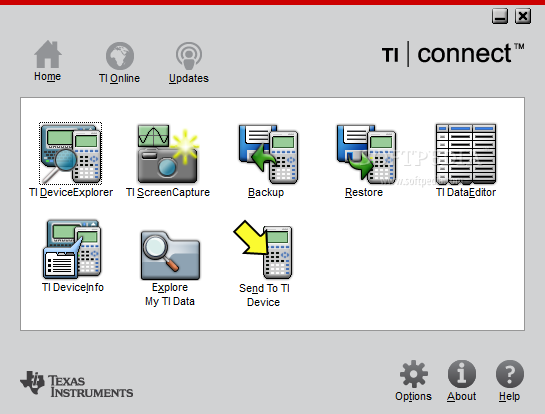 In 2001, riding the wave of growing Internet popularity, Texas Instruments decided to make its calculators that much more interactive. It launched TI Connect, a software solution which allows data from TI calculators to be transferred onto PCs and Macs via a cable. This effort, centered on giving users the possibility to run the occasional backup, was the company's second foray into this field, following the defunct TI-Graph Link program. Released some 6 years after Windows 95, it was still the first attempt TI ever made beyond the 16-bit paradigm used in earlier versions of the operating system. The TI 84 works fairly well with the software, given the fact that they were released only 3 years apart. However, several models of older Texas Instruments calculators are not supported, such as the TI 82 and 85. Newer devices will often experience software lags, usually caused by the slow transfer connection between the computer and the calculator. 64-bit systems are particularly plagued by such issues, which TI only addressed in late 2009, when it came out with a patch to this end. Newer graph calculators, like the TI 89 and TI Nspire also encounter frequent unexpected errors, which has prompted the user community to recommend using them in conjunction with the TI Send To sub-app rather than with the main program.

Additionally, you can try a virtual T84 emulator online. Where can you find them? Plenty of websites offer such a simulator, ready to help with any calc problem or graphs you might need to solve for school. TICalc is a still-active website that offers such services and there are also several good iOS and Android apps you might want to try out. Do not forget to share any website or downloads with the rest of our readers. Also, aside from the issue of cost, let us know if the mirage of online tools can compare to an actual hand-held manual TI-84 Plus calculator.